Business insolvencies in France: new year starts where the old year left off

The number of new companies rose 9.8% over the year (331,239, excluding autoentrepreneurs). This is another indication of company dynamism and has almost returned the figure to pre-crisis levels (340,686 foundations in August 2008). However, more new companies will also mean a negative secondary impact of more insolvencies. Three companies in ten fail in their first three years according to INSEE2. 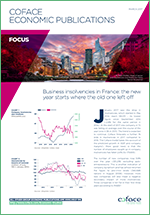