Wind energy industry: Production costs will increase under the influence of the trade war and the liquidity squeeze

Alongside other renewables, wind energy has experienced a strong growth since the mid-2000s across the world, spurred on by strong support from governments, its favorable cost-competiveness ratios (compared to nuclear plants or coal facilities) and a less damaging environmental impact. In contrast to the solar panel industry, with wind energy China hasn’t been able to outperform Europe because Chinese turbine makers are highly dependent on the local market and are vulnerable to any changes in public support. Europe’s reputed quality relies on a large ecosystem, where innovation and competition are fostered, and the global scope of its sales development. Coface expects European manufacturers to continue to dominate over the next decade, due to their technical lead and strong national / European financial support.

Wind energy is growing fast due to the decreasing selling prices of wind turbines, but this advantage is a problem for manufacturers as it dents their profitability and may exert pressure on potential investments. Moreover, raw materials prices are increasing and production costs will go up accordingly, as the industry is facing many challenges meanwhile:

Windmills being made mainly of steel, the industry will suffer from the protectionist measures implemented since June 2018. Extra costs induced by the ongoing trade war will not be felt this year thanks to hedging and contracts negotiated with suppliers, but in 2019 raw input prices are likely to rise. Higher costs won’t be translated into the selling prices but will impact the bottom line of manufacturers.

So far, wind farm development has relied on public subsidies and easy access to financing. Given the tightening of US monetary policy, the end of quantitative easing by the ECB expected by the end of the year and some governments stopping their subsidies, access to liquidity is expected to become more difficult. This situation will intensify the competition between wind turbine manufacturers, driving prices down again. Coface predicts several mergers within the industry which would allow manufacturers to attain sufficient size in order to bring raw material and equipment costs to lower levels. 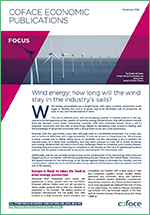 
Wind energy: how long will the wind stay in the industry’s sails?