The net number of protectionist measures currently in place throughout the world is 2.5 times higher than in 2010. In most advanced economies (such as the US, Western Europe, Japan, Canada and Australia) and in many of the large emerging countries (Brazil, Argentina and India), the share of imports impacted by protectionist measures is higher than imports benefitting from favourable measures. Nevertheless, several South East Asian countries (such as Vietnam, the Philippines and Cambodia), as well as Russia and a number of Latin American countries (including Mexico, Columbia and Peru) are not following this trend. The increase in customs duties on imports stands out among the protectionist measures. Although these are still somewhat lesser employed than other instruments, their use has doubled in 9 years (16% of the total measures used as of September 2018, compared to 8% in 2009). Unsurprisingly, the acceleration in import tariffs in the United States has been particularly noticeable between 2016 and 2018 – a period during which they rose from 5.4% to 12.5%. This period reflects the turning point in the country’s trade policies, following the election of Donald Trump. At the same time, with the number of regional trade agreements continuing to grow, easing trade barriers is currently the most widely-used instrument for encouraging free trade networks and multinational production chains.

Increased protectionism, triggered by the recent rise in US customs duties, is giving rise to concern that many of the countries involved in production chains will be impacted by knock-on effects. In addition to the direct effects, Coface has identified indirect negative impacts of tariff increases on the value-added exports of 12 business sectors, in 63 countries. A one percentage point rise in US tariff barriers, to any given country, results in a 0.46% decline in value-added exports from a partner country to the country targeted by the customs duties (all things being equal). When this estimation is limited to manufacturing sectors, the fall would be 0.6%.

"The indirect effects on the value-added exports of partners that trade with the countries targeted by US tariffs are significant – although, unsurprisingly, lower than the direct impacts” commented Julien Marcilly, Coface Chief Economist. “This can be explained by the fact that partner countries may redirect some of their exports to other US supplier countries that are not affected by tariff barriers. This would make it possible for partner countries to mitigate the contagion effect on intermediate goods exported by partner countries.”

The indirect impacts are particularly prevalent in the transport sector (which includes the automobile industry), as it involves a complex multinational production chain. If US tariffs on the transport sector for a targeted country are increased by one percentage point, this could lead to an average fall of 4.4% in a partner country’s added value exports to the country concerned. As an example, Germany, Japan and the United States are the three countries most impacted by the indirect effects of US tariff barriers on Chinese automobile exports. The machinery, mining and paper-wood sectors are also affected, with elasticities of -3.1%, -3.1% and -2.4% respectively. As regards the electronics sector (-1.4%), Vietnam, South Korea, Japan, Taiwan and Thailand will be the biggest victims of the indirect effects of US tariffs on Chinese phone exports. Conversely, the indirect impacts are lower for food products and relatively insignificant for metals, chemicals and agricultural products. 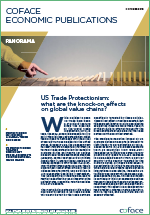 A new deal of cards for emerging markets

US Trade Protectionism: what are the knock-on effects on global value chains?