Focus: Corporate insolvencies in Europe - temporary framework amendments kick the can down the road

The economic consequences of the COVID-19 pandemic are of unprecedented scale in Europe. The double shock of supply and demand has resulted in the halting – at least partially – of production in many companies due to the impossibility for some employees to go to work, and in a fall in consumption because of mobility restrictions. The decline in revenues has deteriorated the liquidity of companies, fostered an increase in payment delays and, ultimately, of illiquidity. In most European countries, the occurrence of a situation of illiquidity compels the director of the company to declare it within a given deadline to the competent authority who will then initiate an insolvency proceeding, failing which he will be held personally liable. However, in order to simultaneously protect the structure and the recovery capacity of their economies once the pandemic is under control, the vast majority of European governments have: 1) implemented measures to support corporate liquidity, such as deferrals (or cancellations) on social security contributions and taxes, or state guarantees on loans granted by banks and 2) temporarily amended the legal framework regulating insolvency proceedings.

Nevertheless, given the magnitude of the economic shock and the temporary nature of these measures, the latter will not prevent a substantial surge in insolvencies once they expire. As a result, insolvencies are expected to rise sharply across Europe in the second half of 2020 and in 2021. Germany, the least penalized country, would still record a 12% increase in insolvencies between end-2019 and end-2021. France (+21%) and Spain (+22%) will be more affected by the crisis. However, the largest increases in the number of insolvencies are expected to occur in the Netherlands (+36%), the United Kingdom (+37%) and Italy (+37%). While the hierarchy regarding the increase in insolvencies is roughly similar to that of growth forecasts, some discrepancies are apparent. In some cases, these can be explained by the lack of temporary amendments to insolvency proceedings (like in the Netherlands). The responsiveness of insolvencies in periods of economic contraction is also linked to the cost of the procedure (lower in the United Kingdom and the Netherlands). 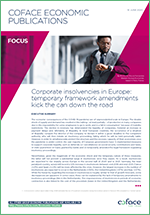