Despite the solidity of Germany’s economy, payment delays are still commonplace

Coface’s first German payment survey, conducted among over 850 participant companies, reveals that, despite the country’s solid economic situation, nearly 84% of companies are affected by delays in their customers’ payments. Nevertheless, the positive situation of German companies is reflected in the fact that they have seen a slight reduction in the financial volumes of outstanding receivables over the past year. Payment delays, for the companies surveyed, remain within manageable time periods. Potential liquidity risks, arising from very long overdue receivables, are thus relatively low.

Export-oriented companies show more mixed results - but a positive trend, with over 24% reporting a reduction in the amount of outstanding receivables. However, 23.3% have seen a considerable rise in outstanding receivables – compared to the average value, for all companies, of 16.9%.
From a temporal perspective, payment delays remain within manageable limits. For over three quarters of German companies, the maximum length of payment delays is 60 days. Thus, the situation for German companies is clearly better than that of their Chinese counterparts. In the Coface Payment Survey for China, the share of payment delays of up to 60 days was 60%, while the proportion of payments of over 150 days amounted to 10%. This latter figure has almost doubled within the last year, due to the cooling of economic growth in China. This 10% share of long overdues in China clearly exceeds the amount of 2.5% seen in Germany. German companies focussing on the domestic market report only 1.9% of long overdues, while export-oriented companies show a distinctly higher value, at 7%.

Delays in payments widely spread across all sectors

Across the 13 sectors examined, the average share of companies suffering from delays in payments is 83.7%, with ranges of around 10 percentage points above and below. Clearly distanced from the other sectors, Textiles/Leather/Clothing is the most severely affected by payment delays, with a share of 94.4%, followed by Paper/Packaging/Printing at 89.3% and Wood/Furniture with 87.5%. Surprisingly, the Textiles/Leather/Clothing sector is the most generous in granting credit periods, despite having the poorest payment record among the industries analysed. The sectors the least affected are the Mechanics/Precision industry, with ‘only’ 75% suffering from payment delays, followed by the Automotive sector, with 78.8% and Wholesale Trade with 81.8%.

According to Coface’s calculations, payment delays amount to 41.4 days on a cross-sector average. However, some segments report much longer payment delays, particularly the Mechanics and Precision Industries (60.0 days) and Transportation (55.2 days). The Chemicals/Oils/Minerals and IT/Telecommunications sectors benefit from the shortest overdue periods. Questioned on their expectations regarding overdues, the ‘optimists’ and ‘pessimists’ are fairly balanced. While Transportation and the Wholesale Trade expect a worsening of the situation, the Paper/Packaging/Printing and the Mechanics/Precision Industries anticipate significant improvements.

Ten of the sectors examined reported a decline in the financial extent of outstanding receivables over the last year. A particularly impressive reduction was recorded in the Wood and Furniture sector, where 38.5% of companies reported a lower volume of outstanding receivables, while only 11.5% saw an increase. Moreover, distinct improvements can be observed in the Transportation and IT/Telecommunications sectors. The ‘problem children’, in terms of increasing financial volume of outstanding payments, are the sectors of Agriculture and Food (+5.1%), Metals (+12.7%) and, in particular, the Mechanics/Precision Industry. Here, only 16.7% of companies experienced a reduction in volumes, while 41.7% reported an increase.

Sale on credit is offered by the majority of companies, with generally short credit lines

Over this year and the next, the German economy will feel the influence of the considerably increased global risks. Compounding the continuation of growth at half-mast in the Emerging Markets, export companies are increasingly faced with political risks arising from the direct European environment. With the result of the Brexit vote, these political risks reached a high. The management of these risks will loom large for both the financial markets and the real economy.

At first glance, it may seem surprising that Coface expects solid economic growth for Germany of 1.5% for this year and 1.7% for 2017 – even though exports are likely to remain under pressure. Germany’s robust economy can primarily be attributed to the strong upward movement in consumer spending. As net exports will no longer be the key driver for economic growth (due to weak export prospects and the strong demand for imports), private and public consumption expenditure have become the guarantors for Germany’s economic growth. Private households are benefiting from the excellent situation on the labour market, with significantly higher pay increases than in the past, the statutory minimum wage, strong pension increases at mid-year and continuing low inflation rates.
As such, private and government consumption remain the main stability buffers for absorbing, and helping to compensate for, the economy’s weak external sectors. Investments, as a domestic component, are also showing signs of weakness, mainly due to risks in the external environment. For both 2016 and 2017, German companies will only increase their investments to a manageable extent, due to major uncertainties over the future development of the world economy.

Germany’s stable economic situation is reflected in the solid financial health of its companies. An important indicator is the development of corporate insolvencies, where the declining trend is expected to continue this year. Following a reduction of 4% last year (and for the sixth year in a row), Coface expects a further decline of 2.5% for 2016. The recent decision on the Brexit is unlikely to change this trend. 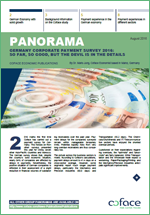 
Germany corporate payment survey 2016: so far, so good, but the devil is in the details